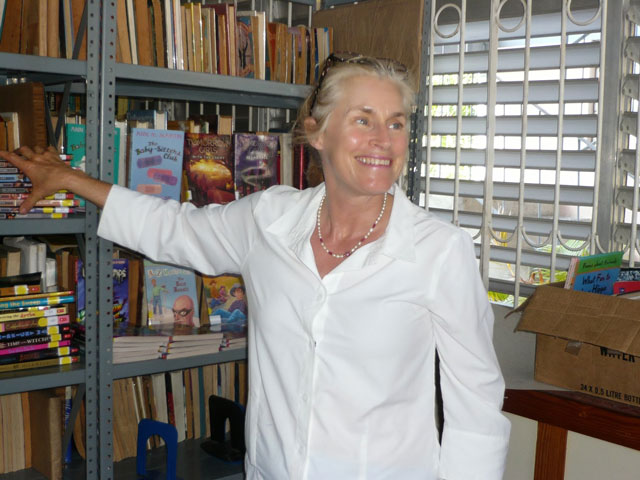 The US based non-profit organization Hands Across The Sea has chosen its awardee for the school year 2016-2017.

An award of US $1,000 worth of new library books will go to the Charlestown Primary School for making the school library more welcoming, comfortable and children-friendly. This was announced on Monday, Jan. 30 at the school, where among the attendees were the school’s library coordinator Londa Brown, Principal Latoya Jeffers and Harriet Linskey who is co-founder and executive director of Hands Across The Sea.

“We pick one school from the Federation of St. Kitts and Nevis to win this award. Charlestown Primary is this year’s winner because you have done such an amazing job with your school library and transformed it into a child friendly space filled with brand new books and making the floor mat with the cushions a very inviting place for children to come in and curl up and read a good book,” Mrs. Linskey stated.

So far the organization has helped 320 schools get libraries going and shipped 273,000 books reaching 70,000 children. They have done so with the help of four local sponsors — the Four Seasons Homeowners Foundation in Nevis, Christophe Harbour Foundation in St. Kitts, Scotia Bank and the Advancement of Children Foundation.

Principal Latoya Jeffers expressed gratitude for the award, acknowledging that CPS put in the work needed for the library improvements and was therefore glad to be recognized for it. Ms. Jeffers also encouraged other schools to get the students to read, although she did admit that it can sometimes be a difficult task, once the space is pretty and you have the books they like to read  then the children will always want to come.

Hands Across The Sea, which celebrates its 10th anniversary this year, has been contributing to the Federation of St. Kitts and Nevis for the last eight years. The legacy of the organization began in 2007 when Harriet and Tom Linskey, lifelong sailors were sailing in the Eastern Caribbean.

Harriet, a former school teacher, suggested visiting a primary school in St. Vincent and the Grenadines where they received a warm welcome but were dismayed by the lack of reading books for the children—a situation they found during visits to other schools in the region. Further investigation revealed that, due largely to a lack of books, child illiteracy was a widespread problem. The Linskeys founded Hands to help raise child literacy levels.

Currently, the co-funders of the charitable organization are in the Federation interacting with schools and education officials as they deepen their long term relationship with St. Kitts and Nevis. Part of their commitment is to training teachers and students on how to manage and sustain libraries on their own using a simple check-out system; a categorization system and an easy way for a library to lend and return books based on having children involved.

Hands Across the Sea is currently the most effective child literacy organization, serving the Eastern Caribbean countries of Antigua, Dominica, St. Kits and Nevis, St. Lucia, St. Vincent & the Grenadines and Grenada.

About The Advancement of Children Foundation